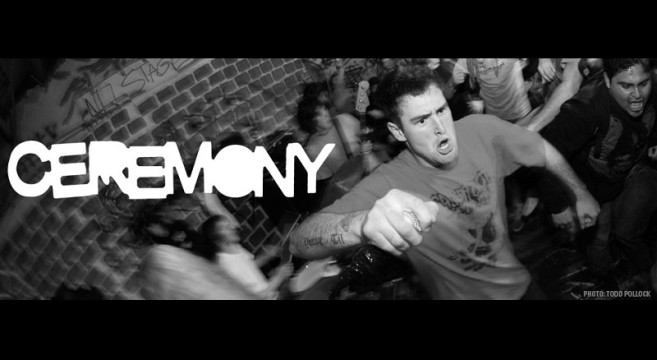 Looking for a great rock show to go to (get it?) this week? Look no further! Ceremony, the punk rockers from Rohnert Park, California, is going to be your next favorite thing. They’re coming to Orlando at The Social on Tuesday, June 23, 2015 w/Tony Molina, Gross, False Punk, and Wildhoney (win tickets below from Lizzy McCormack’s Irish Pub)!

On tour promoting their new album, The L Shaped Man, released May 19, 2015, Ceremony is a blend of punk and post punk, with some hardcore influences thrown in for flavor. With influences that range from Joy Division, Suicidal Tendencies, Pink Floyd, and Tom Waits, you know that it will end up sounding like that sweet nirvana in your ears (Check out the video for “Your Life in France” from The L Shaped Man below).

Formed in 2005, the lineup has been constant, with Ross Farrar, Anthony Anzaldo, Andy Nelson, Justin Davis, and Jake Casarotti. They released their first album, Violence, Violence, in 2006, which featured more of their hardcore influences, followed by the acclaimed and top selling Still Nothing Moves You in 2008.

The last of their hardcore style albums, “Rohnert Park” was released in 2010. After signing to Matador Records, Ceremony began by releasing a new album, with a sound more in the post punk style with “Zoo” in 2012. Finally, in 2015, they released The L Shaped Man which has the makings to be their best album yet. These guys are on a roll, and you should definitely get on board. Can’t wait to see you at the show!

Want to win 2 Tickets to CEREMONY w/ Tony Molina, False Punk, Wildhoney, and Gross, from Lizzy McCormack’s Irish Pub at The Social in Orlando, FL on Tuesday, June 23, 2015?! There are several ways to enter!*

Get Tickets to Ceremony In Orlando HERE! (You can always give them to someone else if you win)