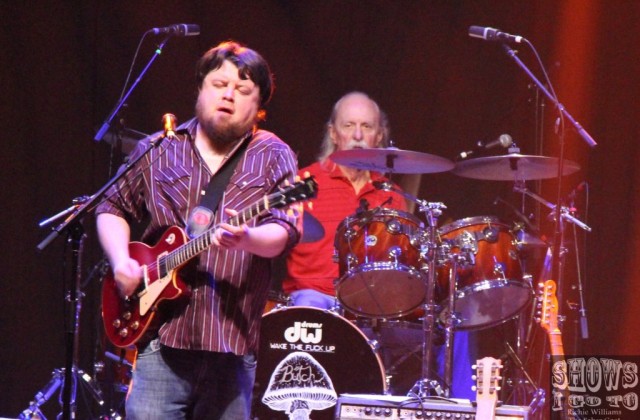 Butch Trucks has been a part of The Allman Brothers Band family since the group’s inception over forty years ago. The Allman Brothers Band was once the biggest American band. Then tragedy struck in the form of founding member/badass Duane Allman’s fatal motorcycle crash in Macon, GA. The band barely had a chance to get off the ground before one of the world’s finest guitarists, a prodigy, a genius of the first order, was snatched from us. A year later, founding bassist Berry Oakley passed away in similar fashion, just three blocks from Duane’s accident. The band seemed cursed. But music is more powerful than one person or even a series of tragedies.

Butch Trucks kept time through Duane’s death. Dickey Betts did his best Duane Allman impression to fill that void. Trucks continued to pound the drums. Many years later, Derek Trucks, nephew of Butch, would step up to play guitar for the family. Butch was still behind the kit. Warren Haynes has formidably held down vocals and guitar since the late ’80s. Again, Butch Trucks on drums.

Forty-five years have passed and Butch is still touring. His most recent run is with a band made up of family. Berry Oakley, Jr., son of the legendary founding Allman Brothers bassist runs with his father’s legacy. Vaylor Trucks, son of Butch, provides Allman-worthy guitar work — excellent lead, smile-inducing solo, and steady rhythm. Butch’s daughter and granddaughter sing on a few numbers. The result is the appropriately named Butch Trucks and the Freight Train Band; and it’s one hell of a good time.

The guy provides the drive behind such legendary songs as “Jessica” and “Whipping Post.” There he sits, behind a drum kit at The Plaza Live off of Bumby Avenue in Orlando. And almost the first thing out of his mouth was that he was not too concerned about whether we were gonna have fun. He was enjoying himself and that would probably lead to our having a good time as well.

No bullshit, no pretense — a guy who has earned the right to call his own shots. He is a throwback who can probably tune his own carburetor. It is apparent that Butch Trucks and the Freight Train Band have no stylist. Acts of a certain profile usually wear really nice jeans and gorgeously embroidered shirts. These folks look like they raided a County Seat, the place where youth pastors shopped in the mid-nineties. Butch Trucks is not concerned about appearances. He is going to enjoy the hell out of a night full of Allman Brothers and Bob Dylan songs with world class musicians cut literally from the same cloth. The music is what matters.

The tone for the evening was set by Thomas Wynn and the Believers’ opening set. Midway through their set, Thomas and Olivia Wynn gave us their original crowd pleaser, “Feel the Good.” In a case of perfectly married opener to legendary headliner, Thomas Wynn and the Believers played honest, Southern Rock from Orlando Weekly’s perennial best rock band. Their cover of Springsteen’s “Atlantic City” stopped the obnoxiously drunk folks in the back in their tracks, silencing the unsilenceable.

Butch is the archetype of the old school, hard scrabble Southern Man. He may not actually punch you if you cross him, but his playing provides more punch than any fist. The second tune The Freight Train Band treats us to is the legendary “Trouble No More,” the Muddy Waters tune gorgeously interpreted by The Allman Brothers in 1969. From there, we got to hear a sampling of Allman Brothers hits along with a couple of Dylan songs, and the Band’s “Ophelia.” “In Memory of Elizabeth Reed,” “Jessica,” Bill Withers’s “Ain’t No Sunshine,” “Knockin’ on Heaven’s Door,” and “Whipping Post” played at warp speed featuring special guest Heather Gillis on vocals, were just a sampling of the two hour set.

Butch brought out his daughter and granddaughter (Vaylor’s daughter) to sing on “Ophelia.” His smile, the palpable pride felt by Butch as he peered from behind his kit at his family playing in front of a thousand people, was a gorgeous encapsulation of the performance. Trucks is having fun, and so are we. The Allman Brothers may never play together again. Hopefully, the band reunites with all surviving members, but getting stuck with Butch Trucks and the Freight Train Band as consolation is not a bad place to be at all.