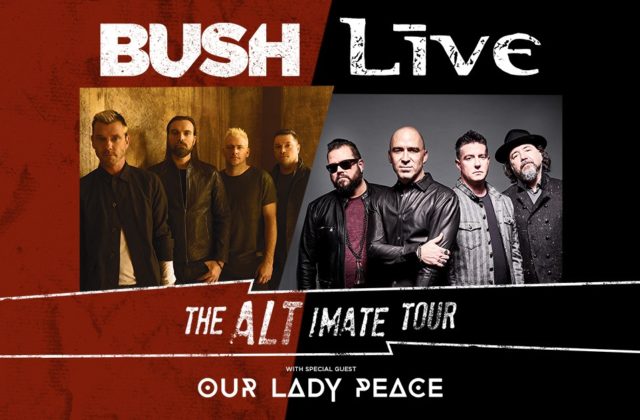 LOS ANGELES (Mar 5, 2019) – Seminal rock bands +LIVE+ and BUSH are joining forces for “The ALT-IMATE Tour,” a high-powered co-headline summer run that will see these two iconic acts celebrating the 25th anniversary of their respective landmark albums Throwing Copper and Sixteen Stone. Produced by Live Nation, this hits-packed road show will hit arenas and outdoor amphitheaters in 33 cities across the country, kicking off June 6th in Mashantucket, CT with stops in Boston, Los Angeles, Atlanta and more before wrapping September 8th in Rochester, MI at Meadow Brook Amphitheatre.

“We are thrilled to be touring this summer with LIVE,” says BUSH frontman Gavin Rossdale. “The wealth and depth of songs from both bands should provide a great night of music. Looking forward to seeing you all this summer.”

“Bush is a great band and Gavin is a super passionate singer and performer. I’m really looking forward to spending the summer with them,” said +LIVE+ frontman Ed Kowalczyk. “I know the fans are going to get one hell of a show.”

Released in 1994 and fueled by blockbuster No. 1 singles “Lightning Crashes,” “Selling The Drama,” “Glycerine,” “Comedown” and “Machinehead,” breakthrough albums Throwing Copper and Sixteen Stone sold more than 20 million albums combined. Both were spotlighted on Rolling Stone’s list, “1994: The 40 Best Records From Mainstream Alternative’s Greatest Year,” and remain timeless favorites, thanks to radio staples that include “Everything Zen,” “Little Things,” “I Alone” and “All Over You.”

“It’s an amazing feeling to know that these songs still resonate so profoundly with people,” says Kowalczyk. “And I still totally get off on celebrating this music with them. With Throwing Copper, we were taking on big things with a big sound. Love, truth, birth, death, philosophy, religion, spirituality…we were asking the perennial questions and poking around for answers with this massive and dynamic sound. It attracted people from all over the world. We were inviting them to imagine that rock and roll could be a valid forum for exploring these types of things…we built it and they came.”

“Sixteen Stone propelled us onto the musical landscape,” says Rossdale. “Those songs have found a way into the soundtrack of people’s lives and that is the highest compliment available. We’ve continued to make music that resonates with people.”

ABOUT BUSH:
With a discography that includes such monumental rock albums as 1994’s 6x platinum-selling SIXTEEN STONE, ‘96’s triple-platinum-selling RAZORBLADE SUITCASE and ‘99’s platinum-selling THE SCIENCE OF THINGS, BUSH has sold close to 20 million records in the U.S. and Canada alone. They’ve also compiled an amazing string of 18 consecutive Top 40 hit singles on the Modern Rock and Mainstream Rock charts. Eleven of those hit the Top 5, six of which shot to No. 1: “Comedown,” “Glycerine,” “Machinehead,” “Swallowed,” “The Chemicals Between Us” and “The Sound of Winter.” The latter made rock radio history as the first self-released song ever to hit No. 1 at Alternative Radio, where it spent 6 weeks perched atop the chart’s top spot. The song appeared on 2011’s “comeback album,” THE SEA OF MEMORIES, which was BUSH’s first studio album in ten years. That year Billboard ran a story about the band under the headline, “Like They Never Left” – a fitting title as the multi-platinum quartet (vocalist/songwriter/guitarist Gavin Rossdale, guitarist Chris Traynor, drummer Robin Goodridge and bassist Corey Britz) promptly picked up where they left off. They’ve continued to dominate rock radio and play sold-out shows to audiences around the world ever since. The band is currently working on the follow-up to 2017’s Black And White Rainbows, which People magazine hailed as “a triumphant return.” 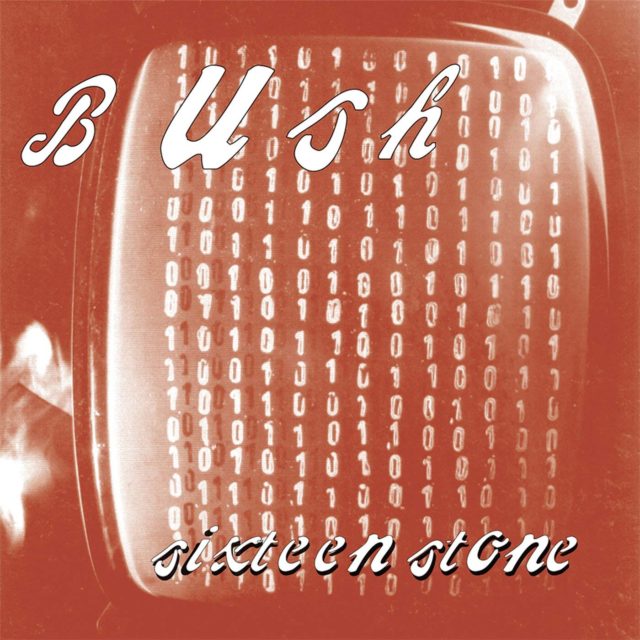 ABOUT +LIVE+:
+LIVE+, the multi-platinum band from Pennsylvania–Ed Kowalczyk (vocals, guitar), Chad Taylor (guitar, backing vocals), Patrick Dahlheimer (bass) and Chad Gracey (drums, percussion)–have sold over 22 million albums worldwide and earned two number one albums (Throwing Copper, Secret Samadhi). Their catalog is filled with such gems as “Lightning Crashes,” “I Alone,” “All Over You,” and “Lakini’s Juice,” which live on today as classics at rock radio. Throwing Copper—which is being celebrated in 2019 with a new deluxe 25th anniversary edition via Radioactive/Geffen/Ume–produced the band’s biggest single, “Lightning Crashes,” which was #1 at Modern Rock radio for 10 consecutive weeks. Throwing Copper reached #1 on the Billboard Top 200 and eventually surpassed sales of 10 million albums sold with Rolling Stone honoring the album with placement on their list, “1994: The 40 Best Records From Mainstream Alternative’s Greatest Year.” Secret Samadhi (1997) immediately shot to #1 on the Billboard Top 200 and eventually went double platinum. The release of the platinum-selling The Distance to Here (1999) turned +LIVE+ into an international powerhouse and moved the band from arenas into stadiums. +LIVE+ has been and remains today a global concert juggernaut. The band released an acclaimed five-song EP in 2018, LOCAL 717, their first new music in over a decade. 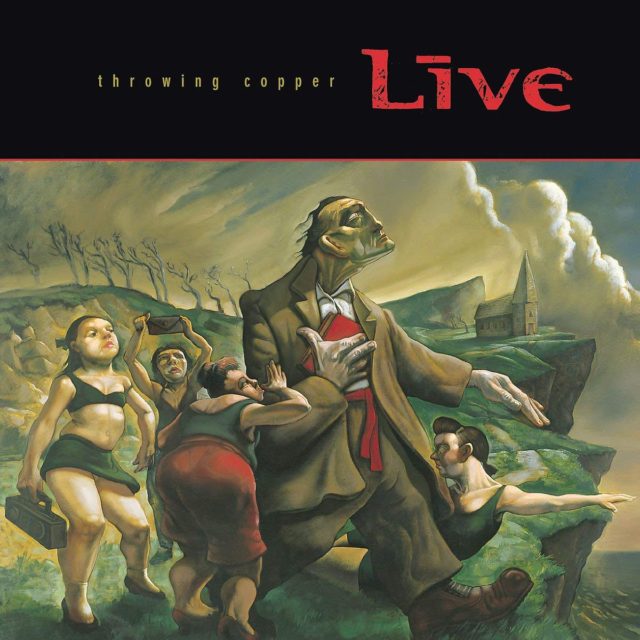