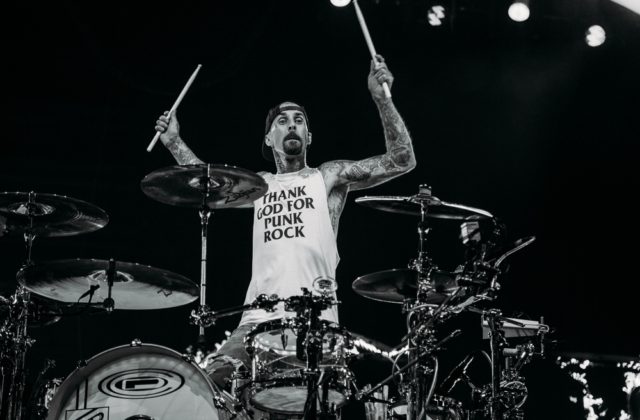 Upon arrival to my sister venue, I had a feeling it was going to be an AWESOME time! Between HoB, SIGT, and friends who were attending, I knew this show was a BIG deal (I mean it did sell out!). I got to the amphitheatre about 30 minutes before the show started. I chugged what I could of my booze before we headed over to the box office. I picked up my ticket and saw that I was a lot closer than expected. Even better, I was house-left aka prime Mark Hoppus viewing.

As I got to my seat, DJ Spider was walking off stage, and The All-American Rejects took over. Their set started with “Dirty Little Secret.” Tyson’s energy was through the roof. He also decided to talk the whole set with a British accent. I was getting The Beatles vibe from him. Why? I’m not really sure, but I think it was the mix of the fun tunes, the accent, and all the love and positive energy in the venue. He compared West Palm to Tampa (weather/humidity differences). Tyson referred himself and the band as The Rejects; pronounced like The Reh-jects (think Alan in The Hangover saying, “retard”). AAR’s 7-song set was the perfect way to start the night. It was all nostalgia. Ritter also referenced 2002 a bit … when life was easier. They broke up the nostalgia with “DGAF.” Tyson bolted off stage and ran into the seats. He ran up and back down the center aisle and climbed on the rails separating the first and second levels of seating. Everyone crowded around him and tried getting selfies with him in the background. If the rest of the new album is anything like “DGAF,” it’s going to be catchy as f*ck. AAR ended with “Gives You Hell.” By the time they finished, most of the venue was packed.

A Day To Remember started about 8 PM. Quickly, more people ran to their seats. I know half the crowd was there for ADTR. The guys are from Ocala, so all the locals were out to see them. “The Downfall of Us All” was their opening song, and the flashing LED screens and lights were on point. Giant beach balls were flying around. Everyone was on his or her feet. [Side note: The seats on my immediate left and right were still empty. There was a gentleman two seats to my left who was typing on his phone most of the night. He seemed to keep to himself. A fellow writer?] Anyway, I was a little surprised the guys didn’t play more songs from their upcoming album, Bad Vibrations (out September 2, 2016). “Paranoia” was the only track. I would think they would have played an extra something for their [almost] home show. *shrugs* Jeremy and Co. slowed it down with “If It Means a Lot to You.” They had the front of house kill the lights and asked everyone to use their flashlight or lighters to illuminate the venue. It was pretty badass. Everyone in GA lit up, and as I turned around to see the crowd behind me, all I saw and felt was serenity. The crowd lit up so brightly. ADTR’s closed out with “The Plot to Bomb the Panhandle.”

On the drive to Tampa, Travis posted on Snapchat the set list for the evening, 24 songs total. I remember seeing them back in the day, and a set list that long seemed impossible. Also back then there was a lot of bantering/immaturity between Mark, Tom, and the crowd. Oh, how the times (and people) have changed. I’ve always been a fan of Matt Skiba and Alkaline Trio. I’m going to be honest, it took me a few listens for California to hit my sweet spot. I was curious to hear Skiba sing Tom’s parts considering the obvious difference in voices … ADTR cleared the stage. Stagehands and roadies went to work. A black curtain went up, people in the crowd started shuffling. I know I saw a bunch of people dip out after ADTR (and more left a few songs into Blink … um, RUDE). For me, anticipation and excitement kept climbing. I still had no one next to me. I was totally ok with that. At approximately 9:23 PM Eastern Standard Time, the first cord was struck. 42 seconds later, the curtain dropped, the first drum beats of “Feeling This” hit, and Blink-182 appeared. “FUCK” was in flames behind Travis. Cryo jets went off. Massive LED screens upstage. The crowd, including myself, went nuts. No matter how loud Mark and Matt were, the crowd still out sang them. Skiba wound up with guitar picks stuck to his forehead. Mark brought it back talking about emo/skater bangs before slowing it down with “Staying Together for the Kids.” The guys played “San Diego” live for the first time. 😀 Travis had an insane intro solo for “Violence.” The visuals were wild and trippy. [Side note 2.0: Travis’ new kit is sexy as f*ck.] Before the next song, Mark started talking to us and Skiba. The short convo ended with: Cue “Dysentery Gary.” Similar to ADTR, Mark had the house turn off the lights and asked everyone to use whatever light they had. He felt it was important to do so for “Happy Holidays, You Bastard.” Before “Carousel,” Mark explained the encore concept. I feel like he does this for every headlining tour. He’s such a dad. A dad I’ve had a crush on since 6th grade … well, well before he became a dad. The encore was four songs! Two new, “Los Angeles” and “Brohemian Rhapsody,” and two old, “All the Small Things” and “Dammit.” People started leaving during the encore. Mark and Skiba had matching pink bass and guitar. My heart melted a little bit. I thought that was one of the cutest things ever. What a bromance! There lights, more pyro, and confetti that filled the air to end the set. As people started filing out to head home, Mark hopped on drums and started killing it! I think he may have been a drummer in a different life. Overall, the night was majestic. All the feels were going on. So much nostalgia and newness. I have no idea how I didn’t lose my voice. I was singing at the top of my lungs the whole time. I want to relive the night over and over again.

I want to do a shout out here, since I didn’t get a chance to see Garrett at the show: HAPPY [belated] BIRTHDAY GARRETT!!! I hope you were king[s] of the weekend (see what I did there).