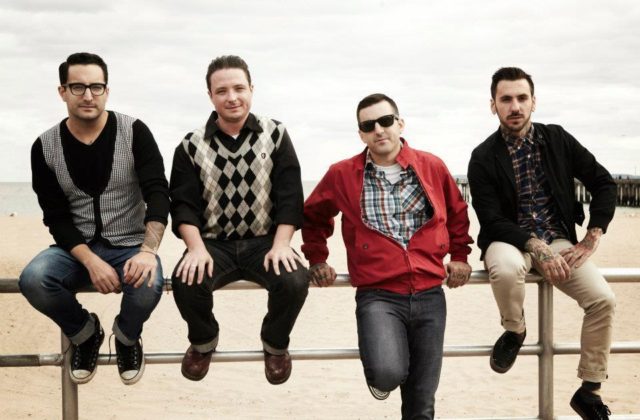 The day of the show, I spent more time lounging around than usual. I knew I needed to conserve my energy for the evening’s festivities, Florida’s relentless heat and humidity, and Motion City Soundtrack the next night. I received word that my friends Mitch and Garrett were also going. Woo, I wouldn’t be completely alone! (ha.) Anyway, the guys still hadn’t left by the time I arrived at City Walk so I picked up my ticket and headed inside. It was way too hot to walk around and grab a drink somewhere else. I preferred securing a good spot in the AC over melting from the heat and needing to shower again. As I walked inside, I texted my buddy to see if he was going to be working the show (he works for Hard Rock production). He wound up getting stuck working The Molly Ringwalds. *sad panda*

I took a gander as I walked into the music hall. Merch was set up on house left. The guys had Vacancy vinyl for sale, even though the album wasn’t officially released yet. [Side note: earlier in the day, they announced the album was streaming on Apple Music. Woo! ] Nick Ghanbarian, Bayside’s bassist, was hanging out next to merch. I wanted to say hi to him, but there was a zealous couple chatting him up and I didn’t want to interrupt. Not going to lie, he’s a good-looking guy, and from what I’ve seen on his snapchat stories he’s someone I’d like to hang with. Instead, I grabbed myself a big ‘ole [overpriced] vodka sprite and claimed my viewing spot dead center, right behind front-of-house. It was prime: slightly elevated with no chance of someone tall standing in front of me. Being 5’4” has its advantages, but also a lot of disadvantages … especially at shows. #thestruggleisreal

Sorority Noise, a four piece from Hartford, CT, took the stage and started the night off. They’ve been around for about three years. I dig them so much! They remind me of all the bands I’ve been listening to since middle school. I felt influences from TBS, Thursday, MCS, and a lot of emo. At the end of the set, lead vocalist Cameron Boucher spoke about addiction and suicide. He had been suicidal in the past. He has lost 5-6 friends to addiction/suicide over the last year, and that’s where the inspiration for the last song came from. Shit got real in the venue.

Mitch and Garrett were still nowhere to be found. I was keeping in touch with them so they wouldn’t miss the whole show. Set change happened. House lights went out. Audio started playing. It was Bill Pullman’s Independence Day speech. Then the lights went up as The Menzingers appeared and started rocking out. It was awesome! I think the last time I saw them was at House of Blues, and I wasn’t too impressed with them then. This time, I was all about it. They’re a prime example that a lot of positive change can happen over time. About two songs into their set, Mitch and Garrett finally showed up with our friend Martin. I was so happy to see three of my favorites. 😀 While speaking to the crowd, Tom May (guitar/vocals) mentioned that the band did not get to go to Universal for the day. Apparently, nobody received day passes. That’s messed up. I think that was the biggest complaint of the night. I’d be upset about it, too.

Overall, The Menzingers did a fckin amazing job. This time, I had nothing negative to say. What I can say is that I’m looking forward to what’s next for them!

Despite the first two sets being so impressive, Bayside managed to steal the show. The energy between the stage and the crowd was electrifying. Being dead center in a room full of people singing every song word for word at the top of their lungs is pretty intoxicating (or maybe that was the vodka-Sprites?). The only break in the group vocals was when they performed songs off the new album. Although less familiar, they were equally as awesome. My only complaint is that they should have played more of the new stuff. I guess I have more to look forward to the next time Bayside comes around.

Overall, the show was pretty rad. The lineup was cohesive and maintained the energy throughout. Shout-out to the light techs for the on-point visuals. Shout-out to Anthony Raneri for venturing into the crowd as he sang “Don’t Call Me Peanut”. If you haven’t checked out Vacancy yet, do it, and come sing with us at the next Bayside show. 🙂