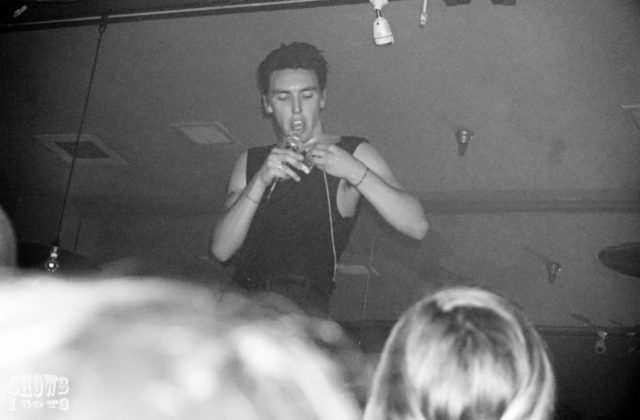 Bad Suns are a band most associated with the pop-rock-boy scene but their musical capabilities are certainly not lacking. Myself and Sarah Schumaker were invited to talk to the band about their latest album, dealing with “sophomore slump syndrome,” and their relationship statuses.

SIGT-Martin: On “Disappear Here,”  lyrics seem like contradictory internal thoughts i.e. “I’m right. I’m wrong. I’m everything but sure. My blazing head. My freezing heart.” What was the inspiration for this song?

Christo Bowman: I think that song came at a time where it was just sort of like everything in my life had sort of like just turned around. Trying to capture the emotion of a crossroads in life being suddenly interrupted by the ground collapsing beneath your feet. Just those situations where it’s like, you’ve got to act now, you’ve got decisions to make and you’re nowhere near prepared to make those decisions or handle those situations. And you get there a little bit faster than you expected to.

SIGT-Sarah: Is that kind of like foreshadowing for this new album?

CB: You could probably say that I guess. Yea, to an extent.

SIGT-Martin: So Christo, do you just do the writing, or do you guys all jump in?

CB: We’ll write the music together. I’ll come up with the song bits and ideas and melodies and lyrics and that kind of thing and then the magic sort of happens. And then we all get in the room and do the Bad Sun’s thing to it.

SIGT-Martin: It’s been two years since your first album, Language & Perspective. What have you learned about yourselves as artists in this time?

CB: Yea, it’s been cool. Especially because for us, it really just started as such like a homegrown thing. We are just a local band from the San Fernando Valley and then we were thrust into this industry.

SIGT-Martin: It seemed relatively quick too.

CB: Yeah! Especially because what we had been used to doing, even though you know we have been this for years. It’s a very different ball game. It’s like all of sudden you’re thrown into the major leagues or whatever. And we were so young when it happened too, like 19 when the album came out. Dealing with all that stuff at once, it was very interesting for us but I think at the same time a lot of the camaraderie helped us to deal with it because we felt like we were our own unit and we weren’t going to be tainted by whatever it was around us that we didn’t like. When you are thrown into a situation like that and you do see the inner workings of the music industry in general, which we weren’t aware of before, it’s really important that we had each other throughout all of that, that we are able to maintain our unit. Despite whatever is going on we remain true to ourselves. One of the biggest lessons and one of the biggest accomplishments was just that the importance of remaining true to your initial intentions or what it is that the band is about and not letting that become tarnished by all of these different outside forces which become present.

SIGT-Martin: I think you can use that for life too. You have to stay focused on what you really enjoy and don’t let the outside bullshit bog you down and ruin that. That’s a cool mentality to have. You tour pretty regularly, how do you not kill each other? Do you guys have any of that, or does it happen?

CB: Not really, probably. We’ve been friends, me and Gavin, for 10 years. We’ve all known each other for so long and it’s like we are brothers and we deal with each other in that capacity, to begin with to where it didn’t even really feel like it was a new thing with touring. Naturally, you do learn more about each other and you do become closer. It’s what we love to do, from a very young age, doing this was all we had talked about and all we ever wanted to do when we grew up. Rather than fighting, we are just really appreciative to be in the position that we are put in, and we are grateful.

SIGT-Martin: I was watching a couple interviews and you had mentioned (Christo) “I tried a couple of things like drawing and acting and I wasn’t particularly good at those things, music just fit.” I think that’s very true, there are certain things that work for your soul and your essence.

CB: Absolutely! That’s what this band was for us, just trying to find our place and purpose.

SIGT-Martin: Ray and Miles, did you guys go to school with Gavin and Christo?

Miles Morris: Just Chris and Gavin went to the same school. We were playing in bands together and knew of each other from the local scene and we decided to play together.

SIGT-Martin: What was is like the first time you got together? Was it pretty cohesive?

CB: Yea. Gav, Miles, and I were playing in bands a bit before Ray was added into the equation and so at that point, we were just kids playing in bands and I do remember the time when we were looking for a fourth guitarist to really finish the sound. We didn’t feel like it was complete as a trio and I do remember the first time we jammed with Ray. There was this certain feeling that it’s not been like this before. There’s always that one guy in the band that seems like they are holding you down and there wasn’t that one guy.

SIGT-Martin: I read some stuff but I kind of wanted to hear another side of what do you think people can expected from Disappear Here? I saw you addressed the whole “sophomore syndrome” and I appreciate that you were like, “Ah that’s not going to happen.”

CB: I hope that now that I said that before the release it doesn’t bite us in the ass. I think this album is pretty exciting ride overall. If there is anything different from the first album, maybe the energy and the stakes are raised a bit. People can look forward to a pretty energetic and fun record.

SIGT-Martin: Ray, did you change anything musically this time around?

Ray Libby: Not really, I feel like the way we’ve always been writing and playing together has remained the same. But you might pick up a new pedal or see some video just to kind of mix it up. But I think the songwriting core is still intact and it’s the base of everything.

CB: I think there is a new urgency to the sound.

SIGT-Martin: I noticed that in “Disappear Here,” the single, you guys released it was definitely more aggressive but in a good, fast paced, kind of style.

SIGT-Martin: The album art for Disappear Here has this odd David Lynch aesthetic with the arm coming out the powder blue sheets and the 80’s signature. What was the inspiration for that? What was the idea you guys came up with?

CB: We were trying to source covers and we had a vague idea in our heads and then the artist we were working with presented us with the separate idea, which is the image you see now. Except it was actually, we found out as were about to press the record, it was an image he didn’t own, it was from a Japanese magazine. It was a nightmare situation and the guy that does our merch felt he could take a crack at it and make it even cooler. What we liked about it was there was a sort of mystique to the image, even in the original one, and then we had an artist come in and at the last second try something else and it made a way better cover. It was a really crazy, happy accident.

SIGT-Martin: It has a really cool look to it. I feel like I was watching Drive or a Nicolas Winding Refn movie. I like the neo-Hollywood kind of feel to it.

CB: I think when you listen to the record too, thematically and everything, it makes sense. I remember the first time I listened to the record while looking at it and it’s just right. It’s just a good thing when you have that.

SIGT-Martin: It’s obvious you guys are excited to be here and we are excited to have you here. We welcome you with warm and loving arms. The other question we have from a large number of our subscribers is, they want to know the current relationship status of everyone.

CB: We are all actually dating one another. We found that monogamy doesn’t really work.

SIGT-Sarah: I got that vibe in here. Matching tattoos somewhere?

SIGT-Martin: Thank you guys so much for being giving us this interview and we look forward to seeing Bad Suns tonight and in the future.