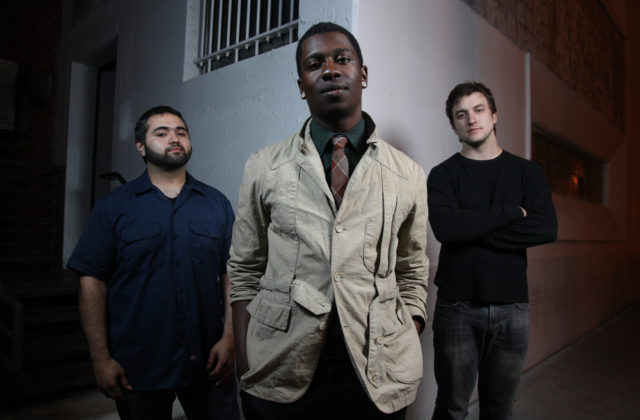 I’m shocked at the amount of times I’ve accidentally seen Animals as Leaders. To me, they’ve been the musical equivalent to that one guy you always bump into at parties, and wished you liked more to appreciate these run-ins, but don’t. That’s been my relationship with AAL, the California instrumental trio who are the current reigning champs of the genre affectionately (and appropriately) dubbed “Djent.” On paper, they’ve always seemed like a band I would love, yet they never escaped the “Periphery”* of my musical sights. That is, until they released the surprisingly good new album, The Madness of Many. So good in fact, I decided to see them at St. Petersburg State Theater on the tour supporting it. Does this mean I like them now? Has their appeal finally clicked with me? Read this review to find out. Or skip to their conveniently labeled section if you’re in a rush.

*plenty more djent/prog jokes where that came from

Oh, decided to read the whole thing? I appreciate it! So would Plini, I imagine.

Plini (the Sydney-based musician whose real name is ACTUALLY Plini) has lot in common with Animals as Leaders: they’re both once-solo instrumental projects built on the foundation of metal to create dense and intricate compositions. What separates the two, is that he definitely pulls his metal influences into much softer and serene territories.

However, when you have a group like Intervals as your backing band, you can expect them to bring noticeable heaviness into the mix … figuratively and literally. The softness to these songs may have been lost, but there was plenty of personality left intact. Plini’s lead guitar work was clearly the focal point, and it successfully danced around these booming riffs and drums to deliver colorfully whimsical solos that could be as readily found in a Final Fantasy game as much as a venue. I think I prefer the latter.

The fact that Intervals were trusted with helping bring Plini’s music to life should have been my first clue to their reinvented sound. Their newest album, The Shape of Color found the band ditching their former Djent trappings in favor of bright, joyful, and inviting instrumental prog that made their backing-band status seem like a natural choice. Unlike their first set, both guitarists (one of whom was Plini again) shared equal duties for lead and rhythm; creating propulsive jams that focus more on collective efforts over singular talents. For a performance I was anticipating to suck, Intervals managed to Scale the Summit* of my expectations.

*You thought I wasn’t serious about the jokes, weren’t you?

If you actually skipped to this section as I prompted earlier, congratulations. You’ve turned this review into a choose-your-own-show-adventure book. It’s alright. As much fun as everyone was having, I bet they would have skipped straight into Animals as Leaders too if they could.

No matter what show I’ve seen AAL open, they’ve always managed pull in clusters of fervent fans. And every time, these fans would shamelessly pantomime along to the guitars and drums with a believable level of accuracy. This show was no different, except those clusters of music nerds are now large enough to sell out a venue. The band’s growing fame and financial stability was reflected by the highest production value I’ve seen them bring to the stage yet. Tessellated shapes and lights adorned the stage, flooding the venue in jittering, futuristic beams that mirrored the band’s cerebral music.

The lights were impressive, but it was AAL’s immaculate performance that made the crowd truly go wild. All three members are the embodiment of virtuosity in modern metal. Especially project leader Tosin Abasi, as he flaunted his technical-precision and lightning fast speed without missing a single note. And trust me, there were many, many notes.

An honorable mention goes out to supporting 8-string wielder, Javier Reyes, too. Reyes stood toe-to-toe with Abasi as he frequently played both rhythm section and bass simultaneously. How’d he do it? It’s either the work of a pre-recorded back track, or the work of the devil himself. If you weren’t too busy shamelessly air guitaring/drumming with everyone else, you were likely slack-jawed watching these guys’ flawlessly perform, switching your focus back and forth between them like a tennis match.

In an evening of purely instrumental music, all three bands managed to express their own unique, artistic voice. And for each of them, it was also the voice of a shifting tide in metal. And a voice that won’t go unnoticed for much longer. But for now, I suppose, it’s time for me to answer my question from earlier; does this mean I like Animals as Leaders now? Let’s just say, regardless of who hears their voice in the future, I know I’ll hear it loud and clear.*

*Which is just fancy writer-talk for yeah, I guess I like them now, ok? Get off my back.