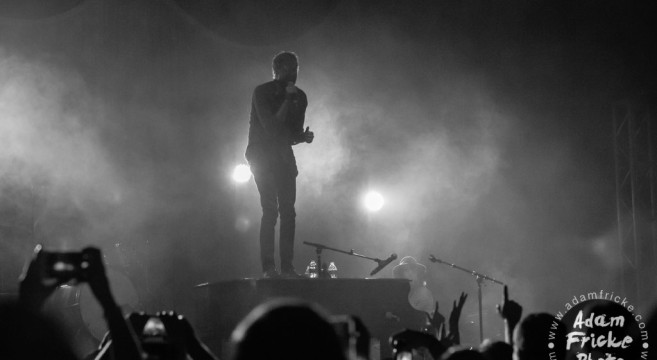 I have a best friend. Maybe a few. One of them has a two-way tie for his favorite band – Something Corporate and Jack’s Mannequin. The dapper lad that happens to front both of these bands was given the name Andrew McMahon at birth. Andrew McMahon now has a solo project/new band where he plays music from both acts. So now my stupid best friend can claim him as his favorite band.

An awesome radio station in Tampa (97X) decided they were going to show their listeners how much they appreciate them by throwing them a free show with a bunch of cool acoustic acts from mid-sized bands. Mr. McMahon happen to be one of them. He flew in just to do this one show.

Important shit – Andrew McMahon recently announced that he was closing the Jack’s Mannequin chapter of his life and moving on. He closed the Something Corporate chapter a couple years ago. My friend was pretty devastated at this recent news, thinking that he would never see him perform again.  So when I discovered he was coming I knew I had to find a way to go.

I also discovered that there was a catch to the show being “free.” To get into this show, you had to:

*None of these areas were Orlando. To make matters worse, they only gave out laminates during times I was working so I couldn’t even drive the hour and a half each way to snag some.

**The radio station gave out an extra couple thousand laminates to ensure the show would “sell out.”

After a few minutes of feeling truly defeated I said “fuck it.” Being the superest best friend that I am, I decided I was going to find a way into the show and surprise him with laminates somehow. I did some digging and posted a few ads on craigslist offering money for some of these “free” laminates. I finally got a solid bite. I coordinated with this guy, agreeing to pay him for the laminates, and arranged for him to meet me at the venue the day of the show. I asked him to arrive early to trade in the laminates to make sure we had guaranteed tickets and good seats. He agreed. This was the day before the show.

The day of the show, I picked my friend up right after work and didn’t tell him where we were going. He still had no idea that Andrew was playing a show. He excitedly mentioned earlier in the week that Andrew posted a picture on instagram saying he was in FL. I casually brushed that comment aside while changing the subject. It went “cool, so how many times have you fallen off you bike this week?” (he falls a lot – stupid dumb idiot).

So along the drive, my BFF make it clear that he wasn’t too happy that I wouldn’t tell him where we were going. I didn’t give two shits. He kept incorrectly guessing the entire trip. I finally had to tell him to shut the hell up. I was nervous the whole time. Hoping that this stranger would keep to his word and get us tickets. I maintained my cool. (Always maintain your cool fool.)

We eventually completed the voyage and arrived only a few minutes late (really good for us). Against the odds, we met up with this stranger. To my surprise, he had already got the hard tickets and even got us good seats! I maintained my cool. I was so stoked on the inside that it all worked out.

My friend continued to ask who was playing since it wasn’t really posted anywhere. I gave him nothing. It wasn’t until we were actually sitting down in our seats before I let him finally read the lineup. He read the names on the laminate one by one. When he got to Andrew, bricks were shit out. He was stoked! Totally made his night. That made my night. (BFFs). We both got to see an awesome performance by one of our favorites. (insert bromance joke).

Andrew McMahon was great. His beautiful voice belted out pure honesty over his incredible piano tunes, playing some classics from both Something Corporate and Jack’s Mannequin. Songs I hadn’t heard in years like Something Corporate – I woke up in a car. It was a nostalgia at its peak. My friend expressed his nostalgic emotions by deciding to use his terrible singing voice to passionately sing all the lyrics to each song. I thought it was hilarious. No one else did.

In 2013, Andrew announced he is making new music and will be touring with a full band under his own name. He has promised to play songs from both bands as well as new material he has written. You can keep up with him on the Andrew McMahon Facebook or the Andrew McMahon Website.

I’m stoked.  The same friend and I already have tickets to see him with his full band on 4/20 at the Beacham in Orlando. Go buy your Andrew McMahon Orlando Tickets and I’ll see you there. I might even be high on pot brownies. Just maintain your cool, man.