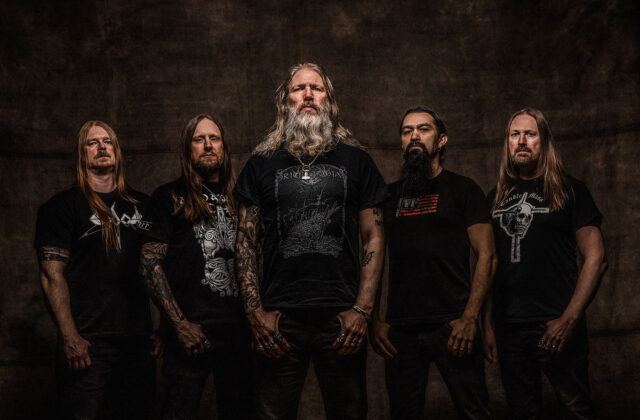 From pole to pole and sea to sea, AMON AMARTH are undisputed kings of Viking heavy metal. Formed in Tumba, Sweden, in 1992, they have forged an extraordinary legacy over three decades of thunderous, anthemic metal, all rich in the magical imagery of Viking history, folklore and culture. Now is your chance ride with them into battle on November 19th at Hard Rock Live Orlando! Joining them are the armies of Carcass, Obituary(!), and Cattle Decapitation. GET TICKETS HERE! From their underground smash debut Once Sent From The Golden Hall (1998) onwards, Amon Amarth have been an unstoppable creative force. With a unique and unmistakable sound that combines the best of several epic strains of metal, the quintet have become renowned for their ageless anthems and explosive, theatrical live shows. Albums like 2008′s widely acclaimed Twilight Of The Thunder God and 2016′s conceptual triumph Jomsviking, the Swedes have been consistent standard bearers for heavy metal as a life-affirming and communal experience, armed with a seemingly endless stream of instant classic songs. Their most crushing and heroic full-length album to date, The Great Heathen Army, is out now and they are touring to support these songs.

Buoyed by the most dynamic and destructive set of songs Amon Amarth have written in a long time, The Great Heathen Army is an album fueled by inspirational stories. While still rooted in times past, these tales of bravery, brutality and dogged determination have very obvious resonances amid the troubled times we live in today.

When speaking about the new song “Find A Way Or Make One,” lead singer, Johan Hegg, shares: “You might be facing obstacles, whether it’s the pandemic or something else, and there are no ways around it, so you have to make a way. That’s what the Vikings did. You can’t stop fighting just because there is something in your way. I often use mythology and history as a backdrop for other things I want to discuss. I’ve always done that. The Great Heathen Army is about when the invading Viking fleet arrived in England in 865 AD. The Vikings had been raiding England for a long time, but this army was something else. It was an invasion army and deadly effective against the British. It’s a massive historical event. It’s fascinating. Somehow, the English won and they defeated the heathen army, so anything is possible!“

Armed with their 12th and arguably finest album to date, Amon Amarth are poised to return to full action with a bloody, broadsword-wielding vengeance. Still ruthlessly devoted to the ways of the warrior, Amon Amarth have Odin’s wind in their sails like never before. Catch them at Hard Rock Live in Orlando, FL on Saturday, November 19th!