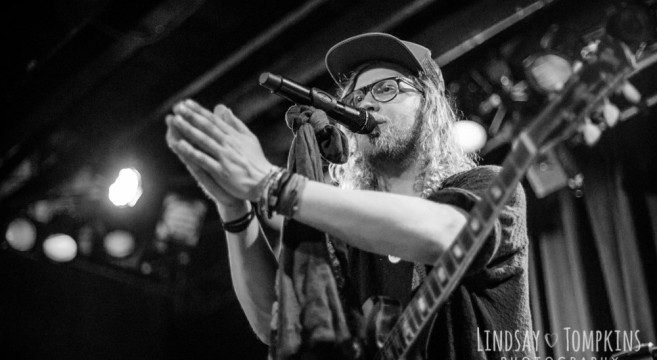 There is a classic adage that states, “Never judge a book by its cover.” Thankfully our generation has adopted this train of thought. We have become the aeon of acceptance. With love and passion we have demolished the long practiced social standard of labeling. Allen Stone is the type of musician you can’t judge or label. With his long curly locks, thick glasses, and stylish hat you would assume he played some sort of electronic indie music. However, Allen Stone dominates in an unlikely genre, soul music. Had the people at The Social that night decided to label him based off his style and looks they would have missed the most important message he has to offer us … love conquers all.

It was on a Friday night, in an ever intimate environment aptly known as The Social, where I was able to discover Allen Stone live. The souls and sound searchers of Orlando came out in throngs. A thick viscosity of vivacious beings battered against the blue lit stage. Lindsay Tompkins, our staff photographer with the electric and artistic eyes of an angel, joined me on that cool summer eve. We could only communicate through hand signals and blinking eyes of morse code. There was nothing but a large flash between the bodies. Before Allen Stone and his eight piece band made their way on stage I couldn’t help but notice that their mic stands were sheathed with satin material as smooth and silky as we would all soon find their musical abilities to be.

Stone opened with “Freezer Burn” and the steady bass drum beat created a crescendo worthy of the battlefield. Between songs, Stone spoke in romantic and spiritual stanzas, “A bunch of beautiful people got up off their couch. Feel Free!” He even made it a point to illuminate how technologically low their live production is, “Everything you hear tonight is happening RIGHT NOW! Ain’t no laptops on this stage.”

Stone’s sound is classically trained while simultaneously being uniquely his. He and his stupendous band made the switch to “Celebrate Tonight” and loved ones began holding their counterparts tightly. My foot beat against the concrete floor in time with Jason Holt’s kick drum. My fingers started snapping, and my heart began to soar. There was so much love in the room, it was overwhelming. With lines like,

“Don’t get lost in your worried mind”

I could only imagine what it would feel like for this moment to last forever. A room filled to the brim with people all coming together to experience a feeling we so frequently hide or ignore. We are all humans; people that bleed, hurt, cry, smile, laugh, and love.

The only differences we should point out in people is what makes them beautifully unique. These are things they can teach to us; ways of seeing, hearing, or feeling things differently than we’ve become accustomed. After taking a moment to allow us to catch our breaths, Stone shifted to “I Know That I Wasn’t Right.” He sat upon the edge of the stage with his seductively sensual siren singer, Jessica Childress. During the track they had an audience member hold the mix while Stone, Childress, and another musician sang.

Certain songs Stone has written tie in social and political issues over alluring notes. “American Privilege,” with lines like “I know it doesn’t seem right. That I – I was born white” and “American Privilege is blurring my vision. Inherited sickness,” the audience couldn’t help but think about their contribution to our culture. It was a call to action for us to consider our decisions on a daily basis. A fond memory I have of the show was their cover of Gotye’s “Somebody That I Used To Know,” the song has always been a crowd favorite, hence its 29th position on the US Billboard Hot 100. Never mind that after such a long run on the charts many people grew tired of it, Stone brought the song back to life and everyone was singing along.

Thanks to Allen Stone and his wonderful band we all have a new mission in our generation: Lets look past labels and see only love. Its not impossible to do and we have begun the process already. Everyone is free to marry who they please, people are able to change their sex according to what they feel their true self to be, and love sees no colors or labels. We have been doing beautiful things in this world. Lets make this feeling last forever and never forget: LOVE CONQUERS ALL.