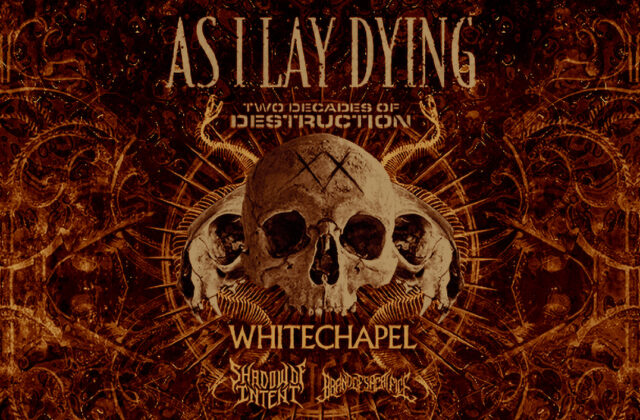 Scientists have spent their entire lives trying to make sense of their role in the world around them. Research and experiments testing the boundaries of what nature has provided has led to humans understanding more and more about their own mortality. This is the main theme of As I Lay Dying, a novel by the celebrated author William Faulkner. Drawing inspiration from his writing, Tim Labesis (guitar, vocals) formed the band As I Lay Dying in 2000. He and drummer Jordan Mancino split off from their former Faulkner inspired band, Point of Recognition, to start their own kick-ass metalcore band. This summer you can experience the flames that fuel rebirth at Jannus Live for the “Two Decades of Destruction” tour to celebrate their 20-year anniversary with support from Whitechapel, Shadow of Intent, and Ov Sulfur coming to St. Petersburg, FL on June, 19th (TICKETS HERE)! The group has overcome a hiatus brought on by Tim Labesis’ 2013 conviction for hiring an undercover detective to kill his estranged wife. He pled guilty and received six years in prison. Meanwhile the band focused on a style and name change to Wovenwar with vocalist Shane Blay. After serving two years, Labesis was released on probation and after several public and private apologies, the band got back together in ‘18. They have received some push back from the music community with venues and media refusing to host or cover them.

In 2019, As I Lay Dying announced a huge North American tour as well as a new album on the way, Shape By Fire. Their first offering in seven years contained hits like “Shaped By Fire,” and “Blinded.” The good times may have been short lived as guitarist Nick Hipa confirmed he’s leaving the band in August of ‘21. Just recently bassist and clean vocalist Josh Gilbert announced his departure from the rock band after fifteen years (he’s currently touring with SPIRITBOX). Ryan Neff, of Miss May I is taking on bass and vocal duties, and Ken Susi of Unearth will join on second guitar for these upcoming tour dates. Through thick and thin, there’s one thing which remains true and constant: AILD’s will to keep breathing and keep push their creative boundaries. Check out their newest single, “Roots Below,” they released in September of ‘21.

These amazing bands will be filling the confines of St. Pete’s coolest outdoor venue, Jannus Live. Here, patrons can enjoy their favorite music while soaking up the Florida sunshine right around the corner from so many great restaurants in the heart of downtown St. Petersburg. Numerous spots to buy refreshments dot the courtyard and a balcony overhead houses covered and posh vip suites for your high-end enjoyment.

As I Lay Dying Ticket Giveaway Tampa by Spencer Storch.