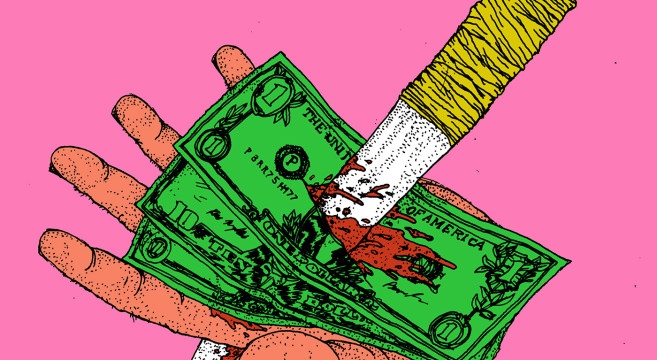 Everything about Diarrhea Planet is a party. Here’s five reasons why you should go to one of their shows:

1. There’s six members in the band. Imagine having six people over for dinner. Guess what? You can’t because if that happened it wouldn’t be a quiet dinner anymore, it’s a party where alcohol is more of a priority than appetizers. Of those six members, four are on guitar and there’s not any picking or plucking going on any of them either, it’s straight up riffs that go from zero to 100 by the first chorus.

2. Each song feel like a sprint in a race to have the best, most amplified time. Among their first three releases (Aloha! EP, Yama-Uba EP, and Loose Jewels) there was only one song that extended beyond the three minute mark. Each track comes at you faster than the other and if you have the will to hit pause between songs, it’s only to catch your breathe. In the bands latest release, I’m Rich Beyond Your Wildest Dreams, the band gets deeper lyrically while still bringing on the noise in their own anthemic, punk-as-fuck way.

3. Diarrhea Planet look like they are having the best time when they’re playing live. As someone who goes to 100+ shows a year, so often a band plays without moving, smiling, or with the least bit of chemistry with each other. Diarrhea Planet crushes that thought bubble. Their set on KEXP came out this week and one of my favorite nuances I picked up on was seeing the drummer dancing along in his chair while they played. They love what they’re doing and it’s contagious for their crowds. Trying to not drop your drink while they’re playing will be a challenge since you’ll be moving, dancing, punching the air, or wherever the spirit takes you.

4. Take a cue from their song “Separations” and join the party at Backbooth on Thursday.

5. They have a song called “Ghost with a Boner.” Case closed.