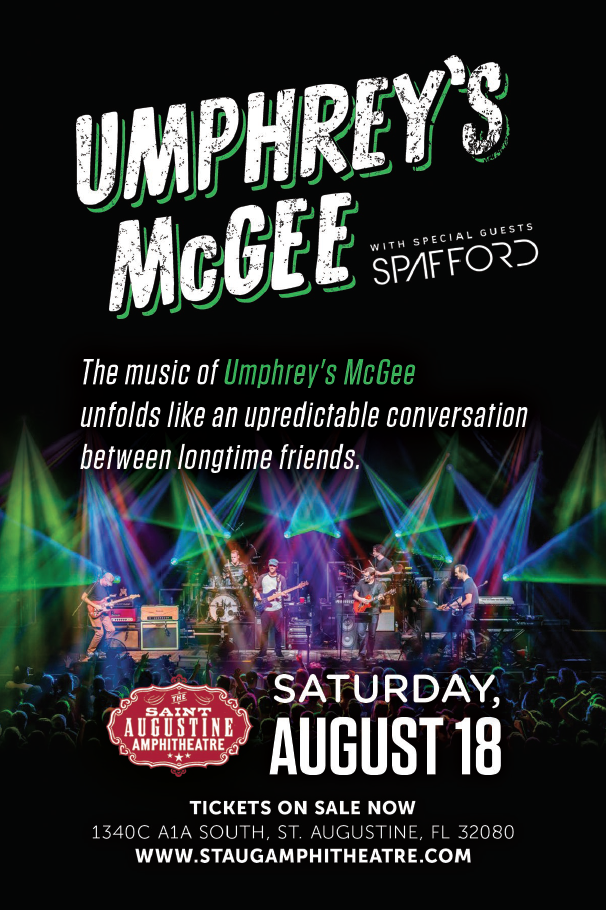 The music of Umphrey’s McGee unfolds like an unpredictable conversation between longtime friends. Its six participants—Brendan Bayliss [guitar, vocals], Jake Cinninger [guitar, vocals], Joel Cummins [keyboards, piano, vocals], Andy Farag [percussion], Kris Myers [drums, vocals], and Ryan Stasik [bass]—know just how to communicate with each other on stage and in the studio. A call of progressive guitar wizardry might elicit a response of soft acoustic balladry, or a funk groove could be answered by explosive percussion. At any moment, heavy guitars can give way to heavier blues as the boys uncover the elusive nexus between jaw-dropping instrumental virtuosity and airtight song craft. The conversation continues on their eleventh full-length album, it’s not us [Nothing Too Fancy Music]—out in January, 2018. “It represents the band, because it basically runs the gamut from prog rock to dance,” says Brendan. “We’ve mastered our ADD here. The record really shows that.” “No matter what you’re into, there’s something on it’s not us that should speak to you,” agrees Joel. “This is a statement album for Umphrey’s McGee. The sound is as fresh as ever. The songs are strong as they’ve ever been. We’re always pushing forward.” It is also how the band is celebrating its 20-year anniversary. Instead of retreading the catalog, they turn up with a pile of new tunes. “We called the record it’s not us, because it’s really not about us,” adds Joel. “This is for the fans.”

Over 2,200 gigs and 5 million tracks sold later, they’ve enjoyed countless milestones. 2002 saw them perform at the first-ever Bonnaroo and sell more CDs than any other act on the bill. They became the “first group to launch its own single artist streaming service” with UMLive.net, which houses recordings of every gig since 2005. The service has since grown and now lives on through Nugs.net, which is used by the likes of Pearl Jam, Bruce Springsteen and more. They recorded ten tracks in one day at Abbey Road for The London Session in 2015. Notably, 2016’s ZONKEY mashed-up the strangest of bedfellows into a critically acclaimed collection that unites Radiohead and Beck, The Weeknd and Fleetwood Mac, Talking Heads and Bob Marley, Metallica and Gorillaz, and more. That adventurousness extends to their legendary audience immersion experiences.

From their initial bar gigs in 1998 to three-nights playing to packed crowds at the legendary Red Rocks Amphitheatre in 2017, the group have simultaneously remained intensely committed to their fans. Beyond intimate backstage encounters and ski trips with their most diehard fans, Umphrey’s McGee instituted the groundbreaking “Headphones & Snowcones” program, granting fans access to professional headphones and a soundboard-quality mix at shows. At their UMBowl, they empowered the audience to vote on the setlist in real-time and choose favorite improv themes via text message. In 2017, they stepped into another realm altogether by integrating themselves into the VR Platform Endless Riff.

Hailing from Arizona, Spafford is comprised of Brian Moss (Guitar), Jordan Fairless (Bass), Red Johnson (Keys), and Nick Tkacyk (Drums). According to Fairless, one of the things that makes the band unique is “the diversity and freedom that comes from having 5 different song writers/lyricists in the band which never really conform to any one specific genre. Even Chuck (Johnson) our lighting guru writes lyrics for our songs, though he can’t play any instrument besides the recorder. That and the freedom of improvisation; it is similar to a good game of chess. I like having to think and also never having to really play the same song twice.” “We Jam.” That is the simplest way Spafford can describe themselves and their sound. In an era of music where the electronic scene is booming and the jam band generation is constantly looking for organic improvisation and creativity, Spafford stands out as a refreshing new sound.