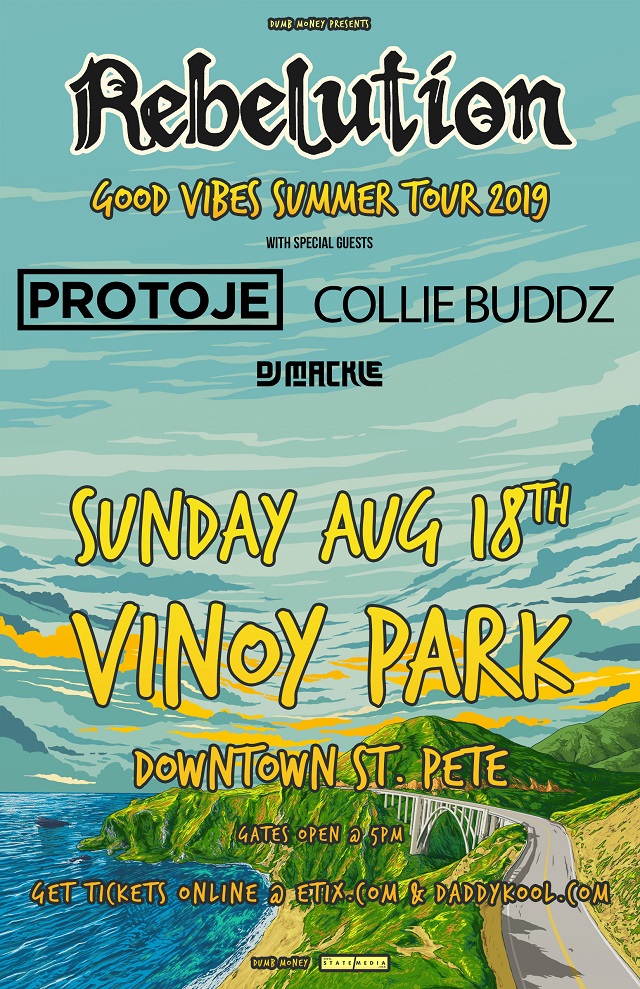 FOR ONE NIGHT ON THEIR “GOOD VIBES SUMMER TOUR”

St. Petersburg, Fla. (February 12, 2018) – No Clubs Presents, in partnership with Jannus Live Presents, proudly welcomes back Reggae juggernauts Rebelution for a one night stop at Vinoy Park in St. Petersburg on their “Good Vibes Summer Tour” with special guests Protoje and Collie Buddz on Sunday, August 18. Tickets for Rebelution’s “Good Vibes Summer Tour” will go on sale to the general public this Thursday, February 14 at 10am.

Fourteen years into an effervescent career, California reggae band Rebelution remains abundantly creative. Its members (singer/guitarist/lyricist Eric Rachmany, keyboardist Rory Carey, drummer Wesley Finley, and bassist Marley D. Williams) are as focused and committed as they are easygoing and laid-back.  And they haven’t lost a step since Falling Into Place, their 2016 studio album, became the band’s fourth release to top the Billboard reggae chart, earning them their first ever Grammy nomination in the category of Best Reggae Album. Ever expanding and reaching wider audiences, the Rebelution phenomenon continues to spread good vibes on tour, and in the studio.

Free Rein, their sixth studio album, while still rooted in the Jamaican inspiration that Rebelution’s songs and sounds have always paid homage to, takes experimental leaps and new adventures too, welcoming old fans and new audiences alike. The musicians collaborated with Jamaican artists on three of the 12 new tracks. Don Corleon (Sean Paul, Rihanna) produced “Rise On Top,” a pointed reflection on celebrity and ambition; and Winta James, producer for Damian Marley and Chronixx, worked with the band on “Settle Down Easy” and “City Life,” two songs that reflect a more confessional perspective.

“Celebrate,” the new album’s opening track, nods to the classic Rebelution sound. It has special meaning for the band too. In their long months on the road, they’ve met fans with health struggles who’ve said that their music has helped them get through tough times. An energizing shout-out to one and all, the song celebrates the oneness of artist and audience.

The band remains in touch with the traditions that it builds on. Much of the style, the songwriting, and the quality of the instrumentals derive from Jamaican roots, says Rachmany, stressing what an honor it is that producers from reggae’s birthplace signed on to work with Rebelution.

But every great band is its own life force as well, and the musicians of Rebelution take inspiration from other genres, including soul, R&B, and folk. “A lot of this album has to do with being comfortable in your own skin,” the singer notes. In “Take On Anything,” for example, “what I’m trying to get across is that it’s OK to be different, different is actually a beautiful thing – if you’re comfortable in your own skin every single day then you really can take on anything.”