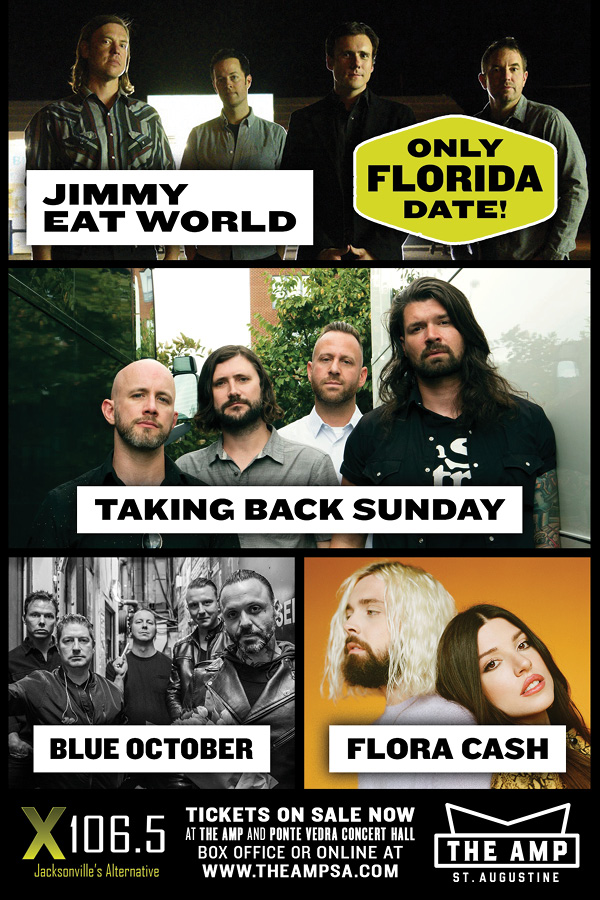 WITH BLUE OCTOBER AND FLORA CASH

Before Jimmy Eat World entered the studio to record their ninth full-length album, Integrity Blues [RCA], the members of the multiplatinum Mesa, AZ rock band did something they’ve never done in over two decades. “We took a little break,” smiles lead singer and guitarist Jim Adkins. After a successful 10th anniversary tour revisiting Futures, the musicians briefly went their separate ways at the end of 2014. When the band reconvened in November 2015, they teamed up with producer Justin Meldal-Johnsen [Paramore, M83] and began sifting through ideas. “I came to a realization,” admits Adkins. “In the break, writing was a little trickier. I wanted to change things up. So, instead of writing about a problem, I wanted to write about a solution. If you look at your life for what’s going wrong, it won’t be too hard to find things. If you start looking at what you have rather than what you’re missing out on, you come away from things with a much different perspective that’s a lot more grateful and positive. As an album, Integrity Blues is about trying to overcome that personal struggle instead of getting upset with what life could be that it isn’t.” Surveying the journey thus far, Adkins maintains the same passion he did on day one, and it continues to fuel Jimmy Eat World.

If you can’t believe that Taking Back Sunday have been around for 20 years, you’re not alone, because they can’t either. Although the pride of Long Island have had a handful of member changes over the years, the current lineup of the band — vocalist Adam Lazzara, guitarist John Nolan, drummer Mark O’Connell and bassist Shaun Cooper — have all been there since the beginning. From the band’s landmark 2002 debut Tell All Your Friends to their most recent full-length, 2016’s Tidal Wave, Taking Back Sunday have evolved from a key player in the early 2000s emo scene to a genre-defying rock band who have three gold albums without ever ceasing to push the limitations of their sound. This fact is evidenced on Twenty, a 21-song collection released in January 2019 via Craft Recordings that spans all seven of their full-lengths and solidifies them as an act with a catalog that will undoubtedly outlive them.

Lone Star State rockers Blue October emerged during the mid-’90s, delivering an emotionally charged amalgam of heart-heavy post-
grunge and slick modern rock. They found favor in 2006 with their platinum-selling fourth long-player, Foiled, which featured the chart-topping singles “Hate Me” and “Into the Ocean,” and built on that success via a succession of albums that saw them go from radio-ready, post-grunge act (2011’s Any Man in America) to stadium-sized synth rockers with an unabashed flair for the
melodramatic (2016’s Home).

Husband-and-wife duo Flora Cash craft atmospheric indie folk born from a cross-Atlantic courtship. In 2012, the pair met on an online social sound platform and struck up a musical connection, leading Shpresa Lleshaj to travel from Stockholm to Minneapolis to meet Cole Randall in person. They returned to Sweden together and immediately began work as Flora Cash. In 2017, their full-length debut, Nothing Lasts Forever (And It’s Fine), attracted widespread tastemaker praise and acclaim from Noisey, Paste, Wonderland Magazine, Elmore Magazine and The Line of Best Fit, to name a few. The quiet grind paid off as the single “You’re Somebody Else” went viral, clocked 7 million streams, topped HypeMachine, and attracted the attention of RCA Records.

Tickets for X106.5’s BBQ featuring Jimmy Eat World and Taking Back Sunday, with Blue October and Flora Cash are on sale, Friday, March 29 at 10am at The Amp and Ponte Vedra Concert Hall Box Offices. Save on fees by purchasing tickets directly from the Box Offices, have first pick when tickets go on sale at 10am and join The Amp staff and WXXJ 106.5FM for a special on sale party featuring free coffee and show posters starting at 8:30am. Tickets will also be available at ticketmaster.com or by phone at 800-745-3000. 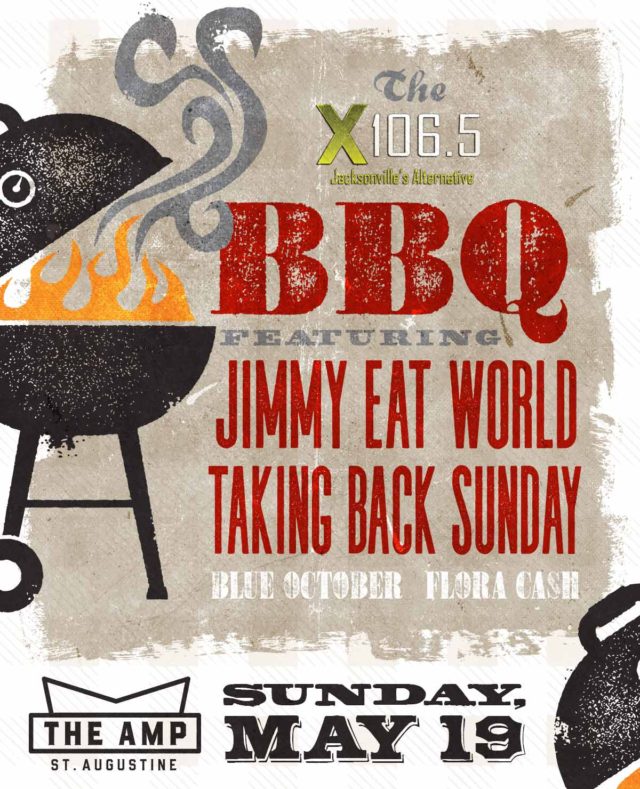