One of the funniest (and foulest) comedy duos to ever hit the screen, Jay & Silent Bob have been slaying moviegoers, live audiences and comic-book readers since viewers first spotted them hanging outside a convenience store in Kevin Smith’s 1994 comedy Clerks.

The partnership began when Smith wrote the character of Jay based on Jason Mewes, a high school friend with a real-life talent for outrageous quips and put-downs. Smith cast himself as Jay’s taciturn sidekick Silent Bob. The characters were such a hit that they’d not only appear in many of Smith’s later movies but star in their own comic book, an animated TV show and Jay & Silent Bob Strike Back, a 2001 cult hit that put the duo front and center on the big screen.

In 2019, Mewes and Smith re-teamed for The Jay & Silent Bob Reboot, a comedy that follows the continuing misadventures of their big-screen alter egos.

Since first appearing as Jay and Silent Bob in the indie comedy hit Clerks in 1994, Jason Mewes and Kevin Smith have commanded the loyalty of countless fellow slackers and misfits thanks to their outrageously foul-mouthed humor and inimitable chemistry.

Those fans may be as surprised as anyone by the duo’s longevity. Smith first conceived of the characters as minor figures in Clerks, which the filmmaker based on his experiences working in a convenience store in New Jersey. He let Jay — closely based on Mewes, a friend of Smith’s from high school — do most of the talking on screen. The characters proved so popular, Mewes and Smith brought them back for several more of Smith’s films before they got a movie of their own in 2001’s Jay and Silent Bob Strike Back.

In the fall of 2019, the twosome returned to the big screen in The Jay & Silent Bob Reboot, another comedy that features many other stars who Smith helped launch, including Ben Affleck. But it’s Mewes and Smith who fans will most want to see when they come to cities across the U.S. for a special roadshow tour that combines screenings with live performances. 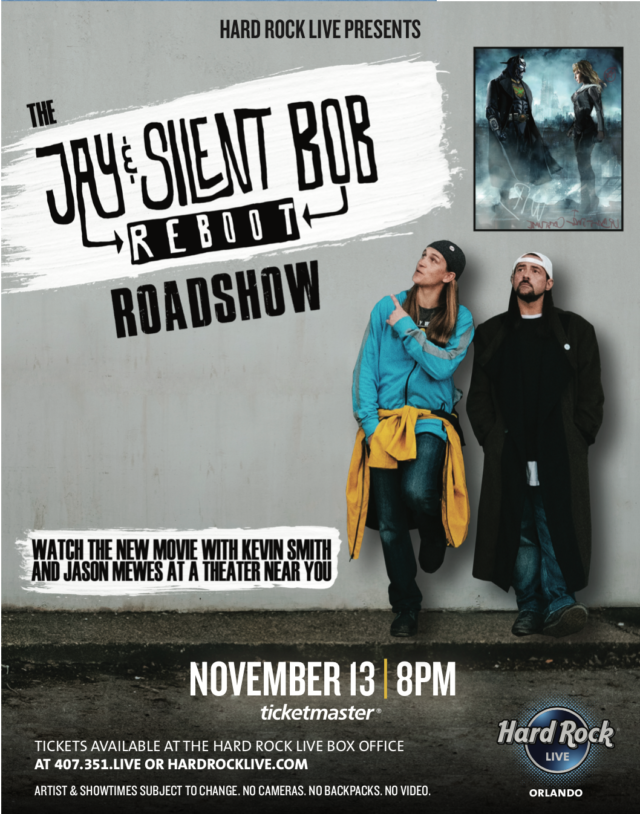