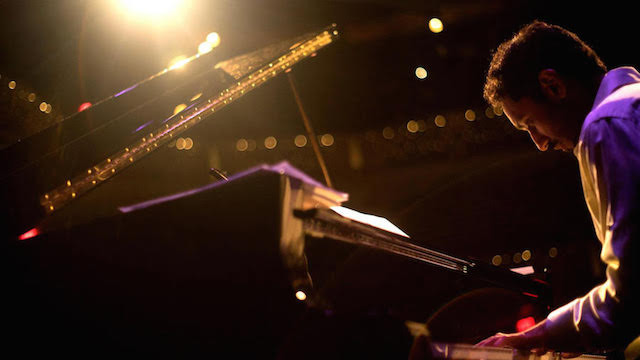 Assume Every Person in This Room Loves You | ASPIRE Live Review | Dr. Phillips Center for the Performing Arts | October 3, 2105

FEAR: It’s a four letter word that incites a quake in my gut just by saying it aloud. But according to composer, pianist, and best-selling author Rave’ Mehta, fear is merely an illusion best described by this acronym: False Evidence Appearing Real. In his soul-stirring piano concert, aptly titled ASPIRE, Rave’ gives a series of TED-style talks about hacking fear and unlocking the secrets to our true human potential. In other words, he blows your mind with profoundly awakening and inspiring theories and then leaves you in awe to absorb them while he plays his accompanying and highly emotional piano pieces.

For fifteen years, Rave’ challenged himself to hack fear. He jumped from planes, dove from cliffs, swam with sharks, and did other unconventional fear-facing exercises all with the common goal of figuring out what fear really is and how to get rid of it.

I remember him saying once that he finally “got it” while standing atop the Orange County Courthouse during its construction. (Yes, he helped build one of our city’s most important and tallest buildings). Looking over the edge, he realized it’s not real; it’s all in our minds. And what’s more, he determined that trust is the ultimate elixir to fear and it opens us up to infinite amounts of love. Love is literally what keeps us alive and thriving. It is our life force; our flow. When we understand this, we are able to completely redefine our boundaries, and over time, erase them altogether. 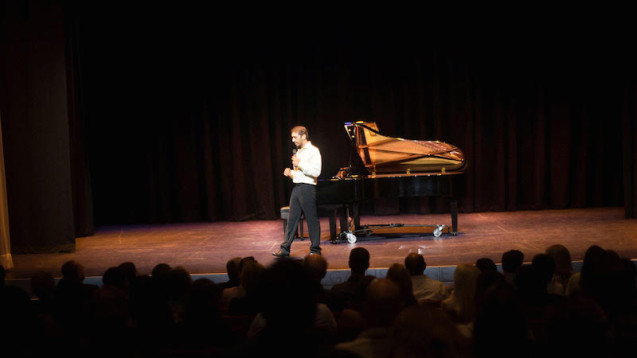 It is with this concept that Rave’ opens ASPIRE. After his attention-grabbing, opening piano piece, he stands before the crowd and challenges us with the idea that when we fully love our self, only then can we become fully human … otherwise we are ‘just’ human. To demonstrate how powerful this concept is, how powerful love is, Rave’ then asks the audience to do one thing:

Assume every person in this room loves you.”

Not even seconds after the words left his mouth, the whole room buzzed with positive vibrations as a series of perceptual shifts transpired. “Let that sink in,” he says as he turns to sit at his piano.

Rave’s composition is unique and all-consuming. There’s a progression to his pieces that leaves you wanting more; an intensity that drives a wonder for what comes next. His body rocks back and forth with the rhythm as it flows through him and throughout all of us. From dark and bass-driven to light and whimsical, each piano piece is composed and curated to give a musical experience for each of the talks he gives. Throughout this 75-minute performance, your mind is tingling with feelings of limitlessness. 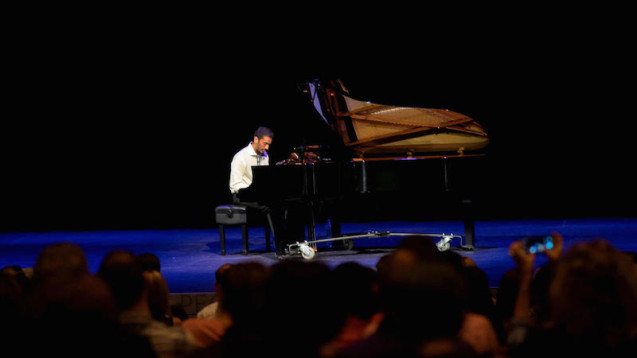 Rave’ purely lets his fingers decide where to take him in his compositions. At first they have a classical feel but as he continues to play, you can feel a blend of new age, world, pop, and even the builds and releases we experience in electronic dance music. His pieces sound completely coherent and like he’s practiced them for years, but I actually found out that the second half of every piece he plays is completely improvised, like a jazz artist. Technically he’s considered a new age artist but what he delivers is a musical style and experience that’s a genre all to its own. 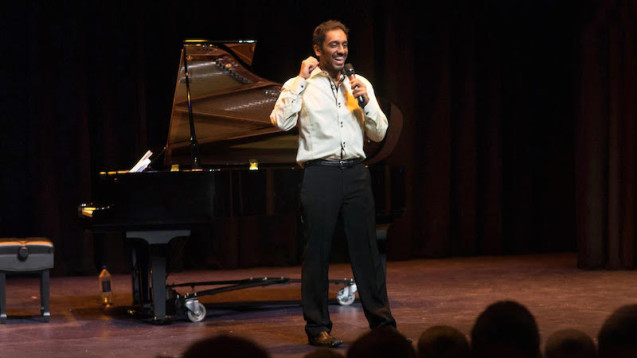 The intermittent talks Rave’ gives during ASPIRE are thought-provoking and inspirational to say the least. In one exercise, he leads the audience on a journey by asking them to say ‘yes’ to every participatory question he asks. The power and positivity behind this exercise is so compelling, you could feel the interaction between Rave’ and the audience energizing everyone by the moment. In another talk, Rave’ tells a story about vulnerability. In this story a warrior battles his shadow, fear, in a colosseum. I found tears in my eyes as he described the warrior removing his armor because it was actually weighing him down in his fight, instead of protecting him. It turns out vulnerability is the ultimate form of courage and the source of our strength.

“Only the bravest dare to enter this ring without any armor, and if they survive and come out on top … there is no greater glory.”

ASPIRE was incredibly eye-opening for me. I can honestly say it was one of the most revitalizing experiences I’ve had in a long time, and for that I am entirely grateful. The combination of the simplistic set (just a man and his piano), the complexity of the topics covered, and the emotion behind the music had me entirely wonderstruck. I realized after the show this week that we can access flow within ourselves at any point in time. Even when things seem totally out of balance, if you put love into whatever you’re doing and live in the present moment, then flow will take over and balance will be restored. The power is within you; it’s within all of us sharing this vast universe. Live with love, and I promise you, your truth will seek you.